Switzerland secures gold at the kick-off 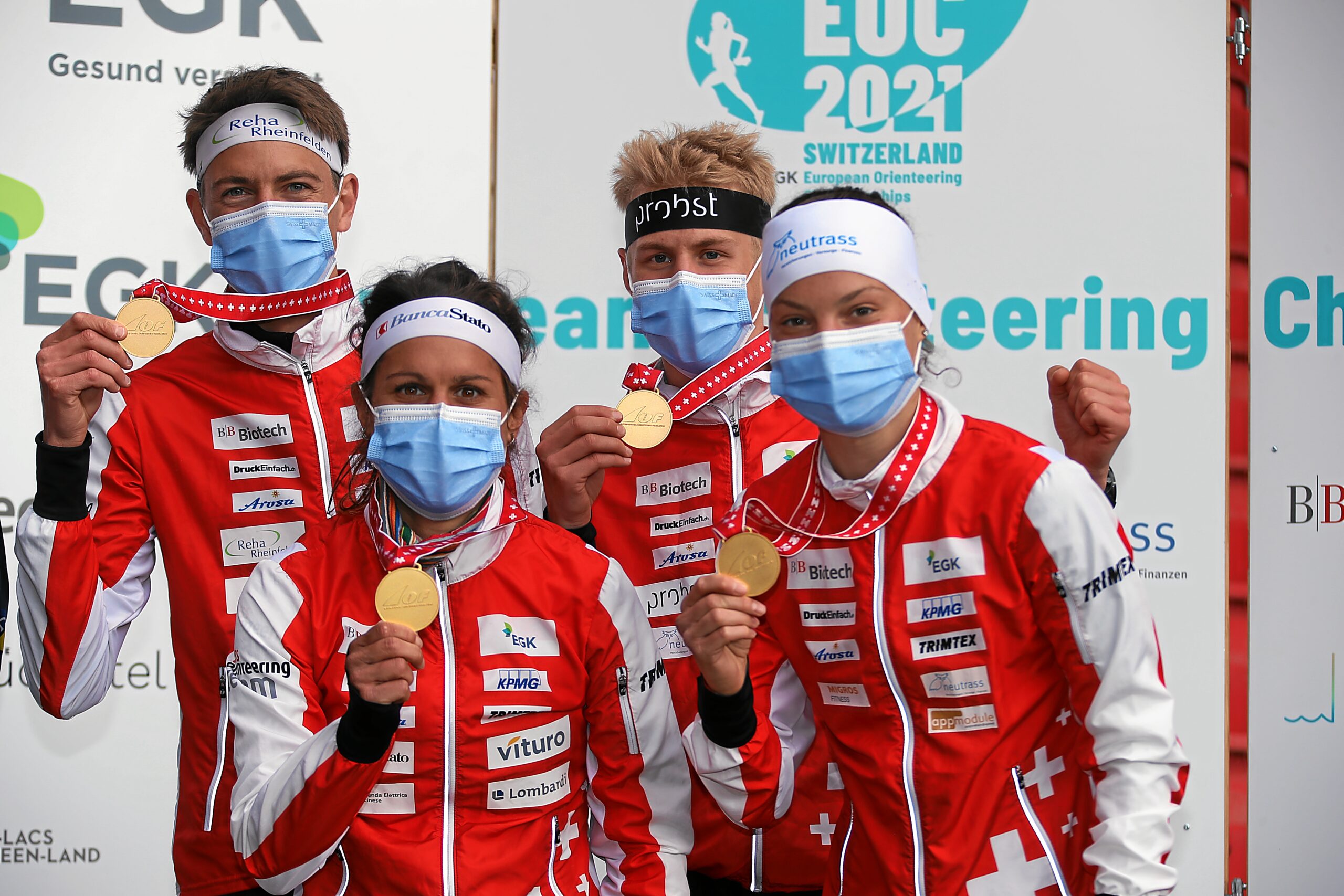 Gold for Switzerland at the European Orienteering Championships in Neuchâtel: Simona Aebersold, Elena Roos, Matthias Kyburz and Joey Hadorn celebrate a start-to-finish-victory ahead of Sweden and Norway.

The EGK European Championships 2021 started out with the Sprint Relay race on Ascension Day in Neuchâtel. The host country Switzerland secured the first gold medal at this year’s European Championships in orienteering. Simona Aebersold, Elena Roos, Matthias Kyburz and Joey Hadorn were able to leave the competition behind from the beginning on their respective legs and celebrate their European Champion title in the Sprint Relay in front of Sweden with Lina Strand, Gustav Bergman, Emil Svensk, Sara Hagström and Norway with Victoria Heastad Bjornstad, Andrine Benjaminsen, Eskil Kinneberg and Kasper Fosser. It was a start-to-finish victory for the Swiss who could win the race with a total time of 56:55. The second place-team lost almost a minute and the third team a minute and a half after the winners.

Already at the EOC 2018 in the Ticino the Swiss Orienteering Team could win the title in this still young orienteering discipline. “I did never think that we could win that clearly again” told Elena Roos on behalf of her team after the race.

The sprint relay race led the total of 23 national teams around the area of the Maladière In Neuchâtel. The finish area was located in the stadium of the same name in the middle of the football field where normally the team from Neuchâtel Xamax FCS plays Its home games in the second highest league of Switzerland.

Between 24 and 28 controls had to be visited on each of the roughly four-kilometer-long legs. The courses led to the outside of the stadium through the adjacent neighborhoods and the parks. They remained alwayss close to the promenade on the shores of the Lake of Neuchâtel. “At first glance the terrain did not appear very challenging” says co-course-setter Nils Eyer. The running pace of the athletes was accordingly high: “due to the high speed, small mistakes could creep in” continues Eyer. With the installation of artificial obstacles in the form of «labyrinths” made with barriers, the technical requirements for the competition were additionally increased.  Such a labyrinth was also on the football field of the Maladière.